Sometimes some things just have to be done. And when you hear of a mountain climbing adventure scaling peaks with names that sound like they’re from lord of the rings in a remote part of Uganda it would be rude not to.

Mount Moroto with it’s twin peaks Sogolomon and Sokdek, rises 3,082 metres out of the plains of Karamoja, home to the Karamajong. So, of course Steve and I joined a group from the Mountain Club of Uganda to see whether we could get to the top.

In the far North East of Uganda, bordering Kenya and Sudan, Karamoja is a remote area only accessible by bad roads. It is one of the poorest parts of Uganda which has experienced many years of violence with ongoing cattle raids, fuelled by the prevalence of AK47s flowing over the border from Sudan.

In recent years Karamoja has seen widespread programmes of disarmament. This has led to clashes between the army and the Karamajong, and reports of the army using disproportional violence. Things are currently somewhat calmer, with less violence and fewer guns (at least visable).

Warthog – the king of cars

There is not much information about mountain climbing in Uganda and no maps of this area detailed enough to walk off. But some people had scaled Mount Moroto before. The Mountain Club of Uganda was originally founded in1947 and was active in the 50’s and in the 90s.

Re-revised for a year now MCU has an archive looked after by Charlie. ‘Charlie’s chest’ as it has become known, had some written accounts of those who had climbed the mountain. One account, written on a typewriter in the 1950s, has a hand-drawn map of the mountain headed by the note ‘no great accuracy claimed for this sketch’. Plenty to go on!

So Steve and I headed off to take our new 4×4 (called Warthog) on the initiation of it’s life. As we drove the twelve hours from Kampala the scenery changed. The square concrete houses of Kampala gave way to round mud huts, the forests gave way to plains and savannah and the roads became worse and worse.

As we neared Moroto we started seeing the Karamajong, most of whom greeted us with warm smiles and waves. The men wear red blankets wrapped around them and many carried bows an arrows (I assume to protect their cattle as a substitute for their confiscated AK47s). The women wore incredible numbers of coloured beads around their necks. 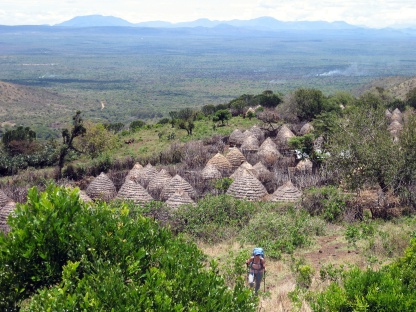 The incredible landscape of Karamoja – photo courtesy of Kyle Holloway

After meeting the rest of the group we drove the 48 kilometres (two and a half hours) to the small village of Tapach where we were to start our walk. And what a drive! Thigh high rivers, muddy ravines and deep potholes. All we could do is hope that it wouldn’t rain while we were up the mountain, or we might be stuck in Tapach until the end of the rainy season.

In Tapach we met with a group of young men eager to guide us up the mountain. Some of us also employed porters as we were carrying our tents and all our water for two days. I opted to carry my own bag, something I instantly stopped feeling smug about as soon as I started the steep, hot climb out of the village.

We traversed up a ridge with incredible panoramic views. The scenery was so different to the walking I’ve done elsewhere. Instead of the mountain ranges of the Alps or Pyrenees we could see for miles out over the flat plains of Karamoja, with the odd ancient volcano rising inexplicably out of the bush. The green mountain rose around us, an oasis of vegetation out of the dry bush below. It was stunningly beautiful as the blistering sun shone down and storm clouds gathered threatening in purple billows over the horizon.

The weather starts to come in

Suddenly the heavens opened.  Even the hardiest most consistent British rain cannot compare with Ugandan rain – it’s like buckets of water are being emptied over your head. An unremitting downpour. We soggily continued up the mountain until we reached a relatively flat ridge just short of the highest peak. The storm had paused momentarily to get it’s breath back so we took the opportunity to pitch tents in the relative dry.

Tent up, I looked over at the guide and porters who had build a fire nearby. They looked sad, cold and wet. I panicked. Where were they going to sleep, what were they going to eat? One of the big problems of doing things in a large group of people is that organising yourselves is extremely challenging. I had assumed that the guide and porters, who had decided where we would camp, would have chosen somewhere near a village where they could sleep.

We scrabble to get up tents

I had assumed these local men knew the mountain well, and I was right. Of course the mountain is not unclimbed. Locals graze cattle and goats on it’s slopes and the easiest way to visit family on the other side of the mountain is to go over it. It’s true that very few had been to the summit (why would you go the the highest peak if your aim is to get from one side to the other as quickly as possible?), but there are many paths over the mountain. Yet our guides and porters were unprepared for spending a night on the rainy mountain. I think these guys had assumed that no-one would be silly enough to walk in the mountains if it started to rain – you would just go back down.

I went over to talk to these local men, with a lead weight in my stomach. I felt like an old colonialist with my tent and warm waterproof next to these men shivering in their blankets. I asked them where they would sleep.  I said I thought they shouldn’t sleep on the ridge as some of them seemed to think we were expecting them to. I asked them if there was shelter nearby and they said there was a cave down the mountain where they could light a fire and get shelter for the night. We all shared some of the food we had and they headed down to find shelter.

This was a serious learning lesson for me that trip. In future if I hire guides or porters I will want to have proper in-depth conversation about it ahead of starting walking. I will try to explain exactly what the job entails and discuss and agree what we are doing about food, shelter and waterproof equipment.

It’s great to employ local people, especially as we were paying them very well for two days work, but in future I want to feel comfortable that we are not providing unreasonable or unsafe working conditions. In the end it was fine on this trip. We had enough food between us to share out. We shared out extra clothing and the guides and porters were fine sleeping in the cave. But it was fine because of chance, not because of forward planning.

That nights the storm intensified. Many people’s tents were flooded and as I snuggled warm in my sleeping bag I thought with dread of the road back to Moroto – would we get back? The next day we emerged into a soggy world, left the camp and headed for the summit. In between bouts of rain and wind we glimpsed the incredible views across the mountain and plain being battered by weather. We reached the top, a top rarely climbed, and looked out into mist.

The stunning though soggy forests just short of the peak

Keen to get down and start driving long before dark myself, Steve, and some others  returned to camp packed up and headed straight down. Others warmed up in tents before following later.

As we descended the cold receded and the rain grew softer. We were able to push back hoods and look back at the mountain we had just climbed. The luscious green valleys rose to the mountain top still ringed with purple clouds and new waterfalls pouring down it’s sides. Local villagers began to emerge from their huts and we were greeted with friendly handshakes and bemused incredulity that we had stayed up the mountain in the storm.

After a slip-sliding and knee crunching descent we reached Tapach around 4pm. We heard that those ahead of us on the road were having to push their car as much as drive it, so with trepidation we got into Warthog and got going, hoping we would reach Moroto before dark. Warthog proved his worth and despite hair-raising mud and rivers two and a half hours later we arrived back in Moroto. We were the lucky ones. Those ahead of us in a Rav4 had taken six hours to drive/push/dig the 48km and those behind us didn’t reach Moroto until 11pm after having to cut out all the seatbelts to form additional tow-ropes.

As we left Moroto for the long drive back to Kampala soon after sunrise the following day I looked back at the old volcano. It looked so different from the previous morning, friendly and benign in the morning light. From the roadside local children carrying water waved and smiled. I reflected on the trip. We had almost not come, worried about the long drive, the security situation and the unknown climb. Yet everywhere we’d been met with nothing but kindness. We’d done so much and learnt so much. Yet more than ever I’d learnt how many more questions I still have about Karamoja and how much I still have to learn. 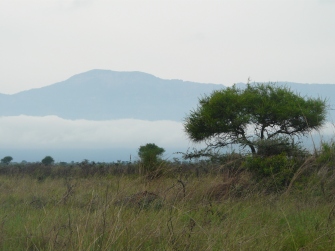